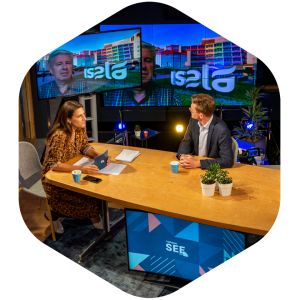 Digital transformation. That was the subject of a major international live event that we were about to produce for TOPdesk. The event was canceled, but during the Corona crisis, digital transformation was more topical than ever. That is why TOPdesk organized an online event with the appearance of an interactive TV show. We turned the huge staircase in the Dutch headquarters into a temporary TV studio and produced a 5-hour live broadcast with international speakers, discussions, live connections with participants around the world and a game. More than 2000 active participants in 42 countries took part in the online event.

That was a shock. The agenda for the first half of 2020 was full of live events. They are all postponed and moved, of course. Fortunately, we also worked on video and online assignments and soon new projects came our way. It is special to see how, even today, everyone finds creative ways to connect people and share stories. We take that into the future.

But we strongly believe in the power of ‘live’. And we see how serious the consequences of the virus are for many partners and suppliers. That is why we look forward to create something for a live audience again. As soon as it is possible!

We are happy with our office! 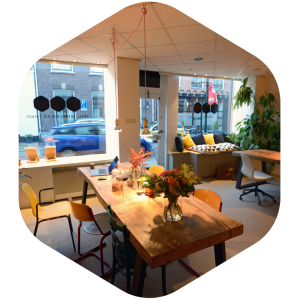 We are happy with our office!

We have converted the former optician on the Cattenhagestraat in Naarden-Vesting into a pleasant workplace. The terrace is great, the coffee is ready, so come by!

We ara proud partner of the Defiant Requiem 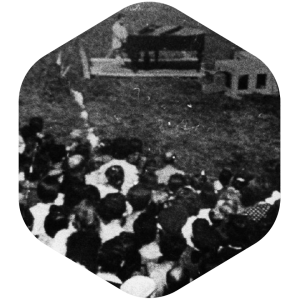 “We will sing to the Nazis what we cannot say to them.”

At the Theresienstadt concentration camp, on June 23 1944, prisoners of war gave the last of sixteen performances of Verdi’s Requiem, for the International Red Cross and high-ranking Nazis.

‘Defiant Requiem: Verdi at Terezín’ presents the story behind this brave act.

This unique performance is coming to the Netherlands for the first time. In a Dutch version with Dutch actors, the National Youth Orchestra, The Netherlands Concert Choir and 4 soloists. The NOS will broadcast the concert drama. With this we make the story available to all Dutch people. Now and in the future.

Due to the corona virus, the execution was moved to May 2021, 76 years after the transfer of the Theresienstadt camp to the Red Cross. Bee Agency takes care of the production. 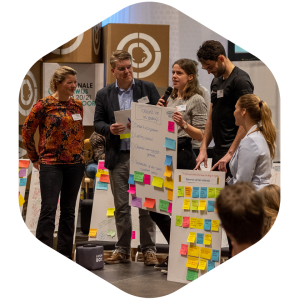 This year Amersfoort is the National Education City in the Netherlands. In collaboration with the city of Amersfoort, BEE-Agency developed a start-up event with 100 enthusiastic stakeholders.

Together we came up with the program for this special year. It was a dynamic evening full of energy. Due to the outbreak of the corona epidemic, all follow-up activities have been postponed until next year.

We wanted to create a homemade gift. Peter’s apple orchard helped. On a beautiful Saturday we all went to pick apples. 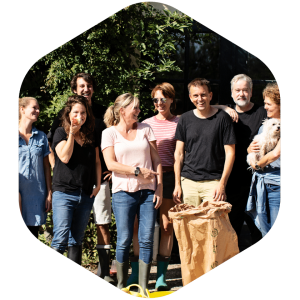 We wanted to create a homemade gift. Peter’s apple orchard helped. 19 different types of apples were waiting for us in old trees, ripe and shiny. So we got to work. On a beautiful Saturday everyone came to pick no less than 600 kilos of apples. In Saskia’s trailer we brought them to Schulp. There they made 500 bottles of delicious fresh juice especially for us.

Curious? We are happy to bring you a bottle!

Once we are big, we want to have our own BEE Ape 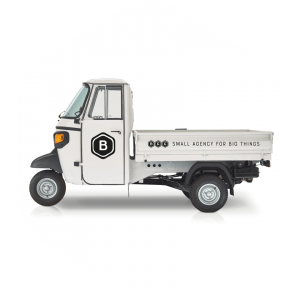 This is the Piaggo Ape, an Italian workhorse.

Ape is Italian for Bee. That is why we dream of our own cart. BEE logo on it, espresso machine in it and hit the road!